The Decline of Trust

The 2018 Edelman TRUST BAROMETER  shows what we all felt — a world full of distrust. The annual report shows dramatic shifts in the marketplace and with the media. Since none of us operate in a vacuum, there are some key points that will affect how you communicate with employees and customers.

On the bright side:

Recommendations in the report for businesses operating in markets that showed overall decline in trust (this includes the U.S.):

In addition, guard information quality (make sure we are transparent, clear and giving the right information). 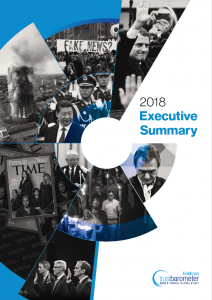